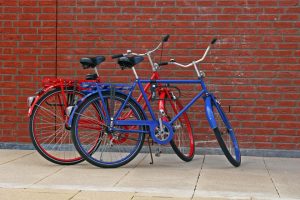 Medics and firefighters on bicycles can quickly weave their way in-and-out of traffic. They can get through large crowds quickly. They can cut through parks and yards and parking lots much quicker than an ambulance.

Our Boston bike attorneys know that when someone can get to an emergency scene faster, it can make all the difference in whether someone lives or dies.

The emergency medical services team in Los Angeles that assisted Fisher, who collapsed on the plane while traveling just before Christmas, were deployed at the height of the holiday bustle. The team were able to get to the scene quickly, swiftly board the plane and help her to receive advanced life support. Sadly, Fisher died at the hospital four days later, but that bicycle crew on the ground getting there when they did gave her a fighting chance.

The L.A. bike unit debuted in 2004 with 20 bicyclists. That team is the biggest nationally, with 120 cyclists and 60 bicycles at their disposal. The team is on alert particularly for special events, such as marathons, parades, sporting events and festivals. The city allocates a budget of approximately $102,000 annually, which goes toward bike maintenance and also to pay for the emergency medical services workers to put in overtime at these events, which they work in addition to their regular shifts with the fire department.

The units were modeled after the police bike patrol units that became increasingly popular about 10 years ago.

Bike medics are becoming increasingly common at airports, sports arenas and downtown entertainment districts. When roads are closed or traffic is congested, they can be especially helpful. These crews get to patients faster, said a former president of the National EMS Management Association. They can navigate sidewalks and streets with clustered crowds. If someone is having a heart attack or a stroke, those extra few minutes are crucial.

One example was seen in Minnesota in 2014, when a 61-year-old marathon runner suffered cardiac collapse in the midst of the race. The bike medic team, which had been roaming the entire course, were the first to arrive. Already equipped with defibrillators, they shocked the man’s heart and were able to stabilize him minutes before an ambulance arrived to transport him to the hospital. He later recovered.

‘Every second counts.’ Cities turn to cyclists to save lives, Feb. 4, 2017, By Jenni Bergal, The Washington Post