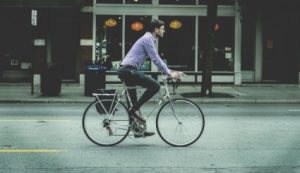 Meanwhile, wholly two-thirds of motorists broke the law, their most common offense being speeding.

The findings of this study were nearly identical to another bicycling lawbreaker analysis by a Canadian consulting firm, which reviewed the legality of some 80,000 bicyclist actions at intersections, finding 5 percent violated traffic safety laws.

Londoners, renowned for their colorful language flair, refer to rule-breaking cyclists as “Lycra louts,” and surveys have found the majority of motorists presume bicyclists routinely ride through red lights. But they like their Boston counterparts are wrong.

In a study by Transport for London, analysts found 85 percent of bicyclists stopped for red lights. That’s not to say it isn’t cause for concern that 15 percent did not, but that’s far from an epidemic or anything close to a majority.

Furthermore, even where cyclists may be breaking the law, the statistical reality is that they aren’t posing a serious risk to anyone bu themselves. Yes, our bike injury lawyers are familiar with a few instances wherein a cyclist plowed over a pedestrian or other cyclists, but such occurrences are rarely fatal. On the other hand, when cyclists collide with motor vehicles – no matter who is at-fault – it’s the bicyclist who suffers the most severe consequences.

More often than not, though, cycling crashes are the result of negligence by motorists.

Regular Cyclists are Safer Behind the Wheel

Being a cyclist further provides valuable safety perspective when that same person is later behind the wheel of a car.

A 2017 study by Accident Analysis & Prevention found this to be yet one more way in which more cycling creates safer roads. This piggybacks off the findings of another study that revealed cyclists who are drivers on the whole tend to have quicker reaction times compared to those who don’t routinely bike. These insurance industry-funded researchers found that whereas 13 percent of drivers overall made at least one claim for either property damage or injury annually, but that figure dropped to 6 percent for drivers who are also cyclists.

The reason, according to study authors, was that cycling has the added bonus of making an individual more attuned to road hazards, and thus better equipped to anticipating danger. Anytime a person is more aware of how he or she fits into his or her surroundings, the better they’ll drive/ride accordingly. The physical exercise component doesn’t hurt, with cyclists on the whole being more physically and mentally agile.

This has led some auto insurers to offer lower rates to drivers who are also cyclists, knowing they are less likely to be held liable for a serious crash, particularly one involving bicyclists – a big win for insurers, as these crashes often result in severe if not fatal injuries, given that cyclists are vulnerable road users.

When cars and bicycles collide in Boston, there can be a number of reasons for it. If the motorist is deemed at-fault (and bear in mind, the traffic officer’s observations are not the last word on this), injured bicyclists can hold accountable:

In the majority of cases, drivers are responsible for bicycle crash injuries, and it often comes down to negligence (failure to use reasonable care) based on violation of one or more of the following Massachusetts General Laws:

Even if a cyclist is found to be partially at-fault for a crash with a motor vehicle, Massachusetts comparative fault law does not bar collection of damages so long as the bicyclist’s percentage of fault isn’t greater than that of the car driver.