In an ideal world, there would not be any serious or fatal Boston bike crashes. While we clearly do not live in a perfect world, and many bike crashes will occur in the greater Boston area each year,  there is no excuse for the driver not remaining on the scene of the accident, regardless of whether the driver believes he was at fault. The actual term is leaving the scene of a traffic accident involving personal injury, but people most often refer to these as Boston hit-and-run crashes.

According to a recent news article from CBS Boston Local, a 20-year-old woman was riding her bike through a traffic circle when she was involved in a collision with a vehicle that was also in the traffic circle. At this point, the driver in the car that collided with her left the scene of the Boston area bike crash without stopping, or even slowing down to see if she was badly injured. END_OF_DOCUMENT_TOKEN_TO_BE_REPLACED

Every time you are on the road, regardless of your mode of travel, there is a potential for an injurious accident. Bicyclists are much more likely to be seriously injured in a collision than occupants of cars or trucks as a bike offers scant protection from a forceful impact. Even low-speed crashes can result in major injuries for someone on a bicycle.  It’s true that most crashes are the result of some type of negligence, meaning one or more of those involved breached their duty to use reasonable care on the roads. Enforcement of speed limits, anti-distracted driver laws and impaired driving statutes is important. But another effective way to reduce the odds of a serious bicycle accident is to invest in good traffic safety infrastructure. Well-designed bike lanes are an integral part of this.

As explained by the National Association of City Transportation Officials, a bike lane is a portion of the road designated by striping, signage and pavement markings that give bicyclists preferential or exclusive use. The goal is to create some degree of separation between cyclists and motor vehicle traffic so those on bikes can ride at their preferred speed without worrying (too much anyway) about conflict with motor vehicles. It creates better predictability of movements between both drivers and cyclists.

END_OF_DOCUMENT_TOKEN_TO_BE_REPLACED

To meet the needs and protect the safety of the the growing cyclist community, there have been a lot of changes including the addition of bike lanes, some with physical barriers, and there have been renewed efforts to educate motorists on the laws pertaining to bike safety.  Unfortunately, there still needs to be a lot of work in both of these area as bike riders are hit by cars on a regular basis, and many drivers do not understand bike riders have the same rights as a vehicle driver while on the streets and roads of Massachusetts. END_OF_DOCUMENT_TOKEN_TO_BE_REPLACED

A civil lawsuit following a Boston bike accident is a case designed to obtain compensation for a plaintiff with respect to any injuries suffered as a result of defendant’s negligence. In many cases, civil defendants who are at fault in causing an accident will be given a civil motor vehicle infraction, but will not be charged with a crime.  In some cases, where there are allegations of operation to endanger or drunk driving, there will be criminal charges filed in addition to any civil personal injury lawsuit.  These criminal cases, or the lack thereof, do not control a subsequent civil case, but they may have an effect on the outcome.

According to a recent news article from the Boston Globe, a group of bike safety advocates in Boston are blaming the driver of a truck for his alleged involvement in a fatal bike crash, but prosecutors are declining to file criminal charges.  This fatal Boston bike crash occurred in 2015.  Prosecutors and police have said they believe the Boston bike rider who died in this accident was at-fault, and thus no criminal charges are warranted. END_OF_DOCUMENT_TOKEN_TO_BE_REPLACED

There is a lot of advocacy being done these days to promote bike ridership and also bike safety in places like the Greater Boston area. A lot of that work deals with the construction of bike lanes and making drivers more aware and educated about bike safety issues. While there has a been a lot of good that has come out of these efforts, there has also been more awareness brought to an entirely different issue.  According to a recent news article from Fast Company, less than a quarter of bike trips (including bike commutes) involve female riders.

While this may seem obvious if you think of all the riders you see around Boston on a weekly basis, it is not an issue that is given much attention. There are various reasons for so few female bike riders suggested and realizing why this situation exists is the first step in getting more women out on the roads on bikes and bringing more equality to the growing community. END_OF_DOCUMENT_TOKEN_TO_BE_REPLACED 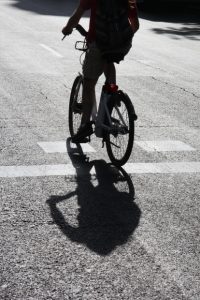 This bike-friendly culture is the reason Dutch drivers are taught in driving school that when you are about to exit a vehicle, you reach for the door handle with your right hand. Why? It forces the driver to reach around his or her own body, causing the shoulders and head to turn – which makes it much easier to see if a bicyclist is approaching from behind. Now, as The Boston Globe recently reported, a 70-year-old retired medical doctor and Cambridge cycling advocate is pushing for Bostonian drivers to do the “Dutch Reach.”  END_OF_DOCUMENT_TOKEN_TO_BE_REPLACED

The vehicle driver was charged with driving while intoxicated, aggravated vehicular assault, reckless driving, failure to keep right and aggravated driving while intoxicated. Because he had two prior felony convictions, he was being held without bail. The aggravated vehicular assault charge stemmed from the fact that his blood-alcohol concentration was 0.18 or higher.  END_OF_DOCUMENT_TOKEN_TO_BE_REPLACED